The video, which was released in the early hours of Friday, was directed by  Meji Alabi.

Nwa Baby was jointly produced by Fresh VDM and Speroach. 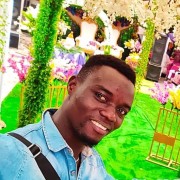